Node.JS Vs. Ruby on Rails 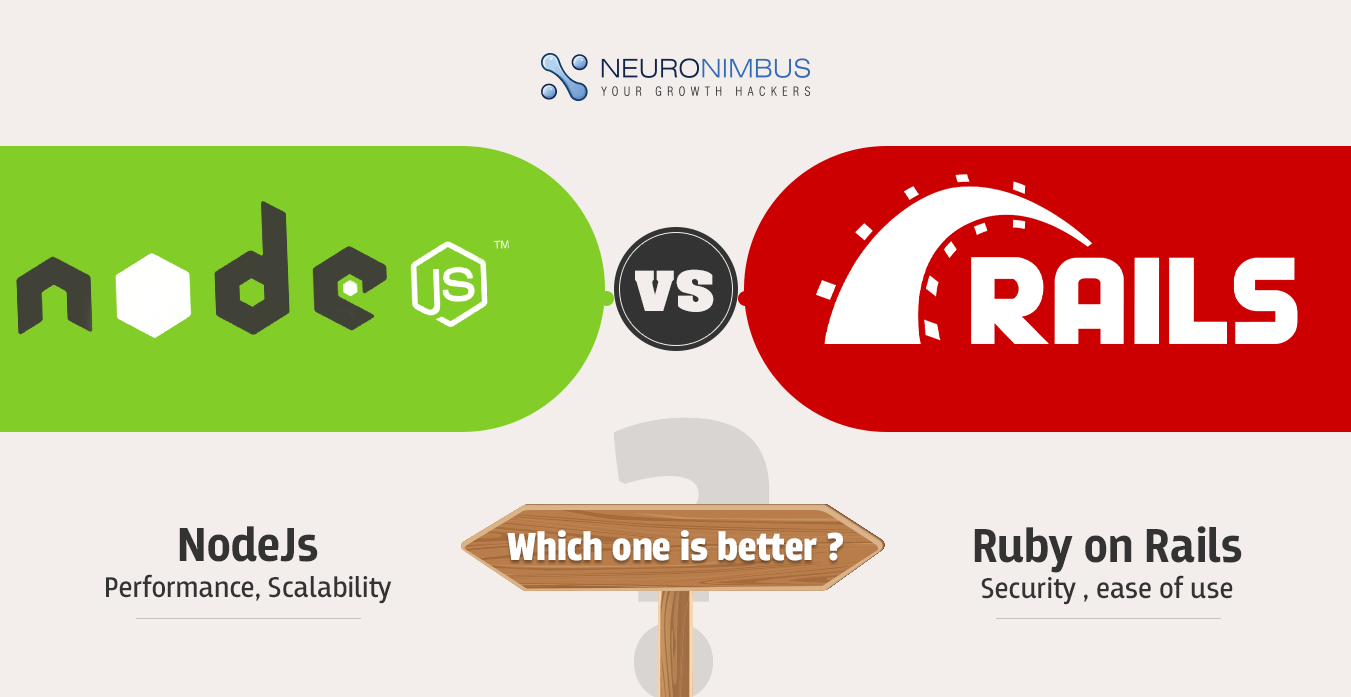 The choice of development platform when designing a website or an app is critical in the success of the project. Since its launch in 2004, ruby on rails has been the King in website development. However, more recent development in JavaScript, which led to the development of Node.JS has shifted the world of programming with leading tech companies like Wal-Mart, LinkedIn, Netflix, New York Times, and PayPal shifting from Ruby to Node.JS. Note that Node JS, unlike ruby, is not a programming language but a web-server methodology mainly used with JS-framework.

Have a project? – Drop Us your query HERE and we’ll get back to you!

Here is a Quick Comparison of the Two:

Speed is critical in the performance of most websites and applications. In terms of speed, Node.JS is the best option owing to several reasons: it is based on Google V8 server, input-output with no blockages, programming that is not synchronized and a range of programming centred events. Hence, Node.JS can handle many requests at a single time. Also, Node.JS can handle the workload of many, simultaneously explaining why technological giants are shifting to Node.JS.

Scalability in web development services is the ability of a system to advance in size to handle the growing work output. This is a critical element in system development since developers’ primary objective is to design a system that can handle today’s workload as well as that of the future. In terms of scalability, Node.JS is the most scalable. The name ‘Node’ emphasizes that a node application must comprise several nodes which can easily communicate. Also, when several node workers cluster together, they create an additional node, hence making Node.JS easy to grow. Thus, Node.JS is ideal for web app development with a focus on growth.

In the programming world, re-usability refers to the ability of a code or an object to be used in existing assets. This implies that the designed code can be used in other programs, objects, platforms, or development process. Re-usability reduces the times and resources required to accomplish a task; hence, it is a critical consideration in website development.

In terms of re-usability, Node.JS is the most preferred. Re-usability is enabled when there is a fair number of rewrites and refactoring, which is a process mainly associated with Node JS. Further, since Node.JS uses object-based prototyping, it is easy to stimulate class inheritance, which supports the use of existing code in future projects.

Ruby on Rails is an excellent choice in terms of security. The best thing about ROR is that you don’t need to invest in a self-provision mechanism. ROR uses XSS filters, which is a major security feature in website development. Further, ROR has a built-in-authenticity which protects website and apps against attacks. Authentication is another way by which ROR offers inbuilt security. Authentication is simply a system of verifying a user before allowing access to a system or a website. The ROR uses SSL encryption to ensure that the data being transferred is secure.

Thus, the choice between Ruby on Rails and Node.JS should be based mainly on the user needs. Here are a few quick facts about each for better decision making. Ruby on rails has been the king in thw web development

Here are a few Pros & Cons to Help You Understand Better

Ø Has a wide a solid community for mature support and guidance.

Ø It is easy to read, understand and develop.

Ø It has a powerful and expressive language.

Ø It is not ideal for larger projects due to its slow speed and limited scalability.

Ø It is light-weight and fast, hence great for websites and applications which require speed.

Ø It is highly scalable, making it ideal for growing systems.

Ø Uses the same language on client and server-side, hence easy to use.

Ø It has a powerful library.

Ø It is suitable for streaming due to its powerful capabilities.

Ø It is not ideal for tasks that require the use of CPU.

Ø It is not easy to read.

Hence, the choice between Ruby on Rails and Node.JS depends on the needs of a user. If speed, performance, and scalability are your major needs, then Node.JS is the ideal choice for you. However, if you prefer security and ease of use, then Ruby on rails is the perfect option.